Music monitoring in our eurovisionary dreams

Our music monitoring technology is tracking airplay of all participating Eurovision 2019 songs.

A universe where disco-powered Putin satire is considered a real musical genre is one we dream of spending the rest of our days in.

A universe where no pair of trousers can be deemed too tight, werewolf-themed metallic wrestling suits are stylish, and dramatically excessive amounts of dry ice is simply the norm.

This aside, it’s hard to put your finger on the exact appeal of the Eurovision Song Contest. We suspect that the majority of fans are fully aware of some entries’ ridiculousness. And therein lies its great wonder.

For us, it’s the fact that, rather like watching a Björk show, you never quite know what’s going to happen next. There are countless articles out there explaining why this country or that country is going to win, but until those votes are tallied up, nobody truly knows. Your guess is as good as the next guy’s.

We aren’t the most patient of people, so we decided to investigate this further. Turns out we had the right tools for it, too.

Hear, there and everywhere

Our technology and data-infused brains allow us the joy of hearing music around the world whenever and however it’s played. As for radios, we currently monitor music across 7000 channels spread across 92 countries. This includes the 41 European countries – and Australia, we wouldn’t #daretodream of forgetting you – involved this year.

Instead of providing broadcasters with our automated music monitoring and reporting solutions, we’ve used our ability to display who is listening to what, where and exactly how much.

Our music identification is tracking airplay for all participating Eurovision songs of the contest’s 64th edition. The pop Olympics, a popularity contest of sorts, calls for knowing just how popular your song is. It also calls for knowing where in the world it is popular, and thus who is likely to be supporting you. We customised one of our Vericast accounts to selectively monitor around 1900 of our 7000 active channels, from within each of the participating countries. We then set our audio-fingerprinting to continually monitor each and every play of any 2019 Eurovision song.

Compiling this data into one Eurovision chart is our shot at giving an insight into who is likely to become the next ABBA, or, make the upper reaches of the Eurovision scoreboard. 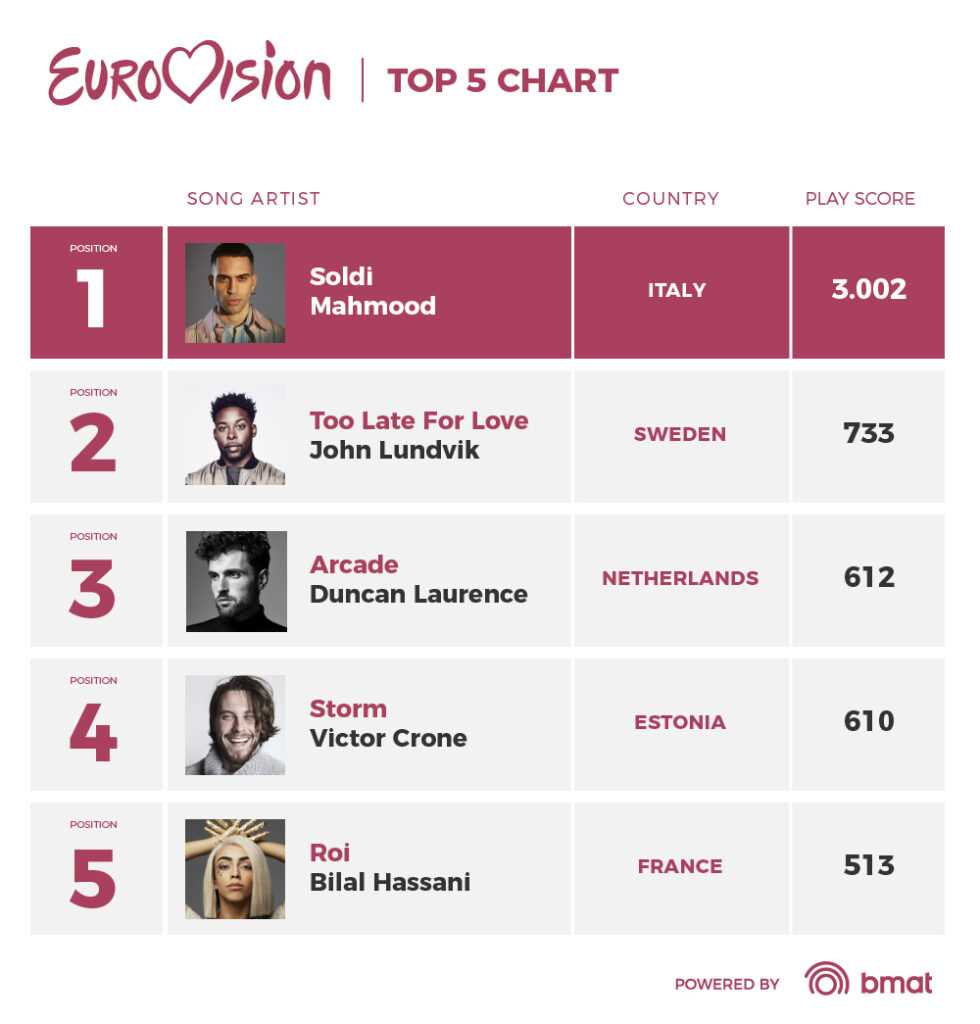 Power to all our friends

The Eurovision Song Contest serves as entertainment, but also as a way to strengthen inter-country bonds. Our data also provides us with a little insight into which countries are playing each other’s songs on their radios. Nothing less than the finest form of flattery.

See who is listening to Portugal’s entry, for example.

Although voters are excluded from voting for their own country of residence, we toyed with the idea of how different the contest would be if a country’s own votes – or in this case, plays – were to count. Spain are 2nd in our global chart, but La Venda falls to a slightly less impressive 9th position when their 4563 units of self-love are disregarded.

Italy’s Soldi by Mahmood is storming ahead on our global chart either way. As it stands, Italy are responsible for 17,040 of Soldi’s prominent 20,042 play score. Without getting geopolitical, the alignment of this next to the fact that none of Italy’s national channels have played any other 2019 Eurovision song is curious. Their national chart is the only one which only includes their own entry.

Trying to guess the winner is a real long shot. To the naked eye, previous winners couldn’t seem more random: a scantily clad Russian in white leather, a Jesus/Kim Kardashian hybrid, a monster metal band, and a real life chicken. With any luck (and music monitoring data), our chart might just help to shine a light on the stage of Eurovision odds.

We’ll catch up with you after the grand final on Saturday to see.